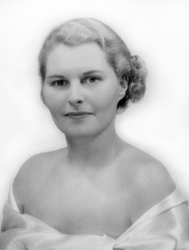 Karin Grunebaum (née Wassermann) was born in Berlin, Germany on September 2, 1918 – the second daughter of a prominent banker. Her apparently very beautiful and loving mother died from cancer-related surgery when Karin was only 6 years old – which would prove to be a strange precursor to Karin’s own life.

From a partial autobiography she wrote, we discovered that she was a tomboy and a very mischievous child. She hated her governess and was always in trouble for pulling pranks both at home and in school and refusing to follow orders. But, she was also a very smart, beautiful and loving child, who was doted on by an otherwise strict Teutonic father.

Karin married when she was just 18 years old and immediately moved to Amsterdam with her first husband, Eduard Wallach. When her husband moved to New York in 1938, as war clouds gathered, Karin had to remain in Europe all by herself for almost a year, before being able to join him in New York. Although German was her native language, within a few years in New York, she was completing the Sunday New York Times crossword puzzle. And in 1946, Karin earned her airplane pilot’s license both in land planes and seaplanes.

She was a beautiful, intelligent, fun-loving woman who enjoyed parties, bright lights and good times. Many people used to tell her that she looked very much like Ingrid Bergman and later, Grace Kelly. But, to her four children, she was just Mommy. A story that her oldest son, Steven, vividly remembers took place one day at dinnertime when Karin challenged him to a pudding-eating race. They each got a bowl of chocolate pudding and at the count of 3 began eating – without using utensils or hands; just face down in the bowl and GO…what a mess that was! But, also, what fun!

After divorcing Eduard in 1948 (long before it became fashionable), Karin married Fritz Grunebaum in 1952 and moved to Massachusetts. In 1953, she gave birth to twins, Peter and Carol. Family life was full of swimming, skiing and traveling – always with love and laughter. One time, when the twins were being punished, they were sent to their room for a half-hour (the pre-modern version of “time out”). A few minutes later, Karin and Steven heard peals of laughter and loud noise coming from the twins’ room and went to investigate. The two kids were having a pillow fight and having such a good time that their older brother and mother immediately joined in the fun and the half-hour sentence was summarily commuted to “time-served.”

In June 1958, at age 39, Karin Grunebaum, the mother of 4 and a loving wife, suddenly passed away from cancer only three months after giving birth to her youngest child, Yvonne. Because her pregnancy had masked the symptoms of cancer, the disease had already metastasized throughout her entire body by the time the cancer was diagnosed a month after giving birth. There was no way to know what type of cancer she had. After Karin passed away, her husband, Fritz Grunebaum, established the Karin Grunebaum Cancer Research Foundation as a lasting memory to his beloved wife so that other families might avoid such a tragedy.